We are a Birder Friendly Business and part of the North Carolina Birding Trail. The Trail is a guide to link existing bird watching sites across the state while connecting birders with local communities, businesses and other cultural and educational attractions. It is being developed by the NC Wildlife Resources Commission, Audubon NC, NC State Parks, NC Sea Grant, NC Cooperative Extension Service and US Fish & Wildlife Service, along with many other partners, sponsors and volunteers throughout the state.

Our 92-acre sanctuary is a haven for many birds. You can watch them from your private cabin deck or take a hike with your binoculars. Nearby are several parks that are popular with birders.

From its riverbanks to its highest cliffs, Chimney Rock Park (18 miles away) is a haven for birds and bird lovers. Deciduous forests on the north and east-facing slopes attract many summer-breeding birds such as scarlet tanagers and as many as 15 varieties of warblers and vireos. The most elusive of these are the cerulean and Swainson’s warblers. You can spot cerulean warblers in the tall trees immediately below the parking lot at the Chimney, and the Swainson’s warbler in the rhododendron thickets, especially along the Hickory Nut Falls trail. 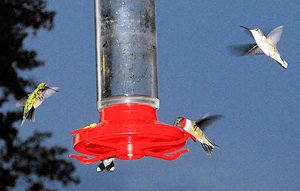 Best times to bird: From mid-April through mid-May Chimney Rock Park attracts many neotropical migrants. The park opens at 8:30 and it is best to arrive early as the birds are most active early in the day and most visitors arrive after 10 am. Birding in September and early October during fall warbler migration can also be good.

Birding Highlights: The park is one of the best spots in the southern Appalachians to get excellent views of some of the more-difficult-to-see warblers including Swainson’s, Cerulean, and Worm-eating Warblers. Swainson’s Warbler can often be heard along the entrance road, especially at some of the sharp bends before arriving at the pay booth. Arriving early provides the advantage of less traffic, thus making stopping along the road easier. Swainson’s Warbler can also often be found along the Woodland Walk Trail. Enter the trail by driving into the picnic area shortly after passing through the fee area and park at the far end near the area where the buses park. The trail forms a loop and is less than a mile long, but does involve some moderate uphill sections and steep steps. Other species occurring on this trail include Hooded, Black-throated Blue, Black-throated Green, and Worm-eating Warblers, Wood Thrush, Acadian and Great Crested Flycatchers. Many other warbler species can be observed during fall and spring. From the picnic ground continue on up the road by car to the parking lot at the top. Walk out on the boardwalk at the top behind the restrooms. Some of the best eye-level views of Cerulean Warbler can be obtained by looking out onto the tops of the trees from the different levels of steps going down to the Forest Stroll trail. The Forest Stroll Trail is the best birding trail in the park. It can be reached either from the steps behind the restroom or from the lower parking area.

South Mountains State Park is North Carolina’s largest state park with over 40 miles of trails. It’s about 50 miles from Spring House Farm. Elevation ranges from 1200 feet along the Jacob’s Fork River to 3,000 feet on Buzzard’s Roost along the western edge of the park. The park is filled with streams and tumbling brooks. The most visited area is High Shoals Falls where the Jacob’s Fork River takes an 80-foot plunge over bare rock.

Birding Highlights: If possible visit the park in the spring, during the migration period. There are several easy trails that allow a most enjoyable morning. The Hemlock Nature Trail is a .74 mile loop that strolls along the river where Louisiana Waterthrush, Black-and-white and Hooded Warblers, and Blue-headed Vireo are commonly found. The High Shoals Falls Loop Trail is a 1.2-mile loop that winds in and out of mixed hardwoods and rhododendron thickets before reaching the top of High Shoals Falls. In the summer check for Worm-eating Warbler. Listen for Pileated Woodpecker and look for Eastern Phoebe around the pool at the bottom of the falls. To find Ruffed Grouse, Rose-breasted Grosbeak, and Common Raven try one of the less traveled trails, such as the Fox or Ben Knob Trails.

General Information: South Mountains State Park is open daily during daylight hours except for Christmas Day when it is closed. Trail maps may be picked up at the ranger station. Park Office Hours are 8:00am-5:00pm weekdays.

For more on bird watching in North Carolina: Go to NC Birding Trail and the Carolina Bird Club. 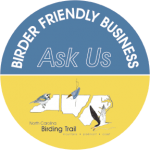